I have been working with a single room in MMO since I started (almost two months ago now). I’ve gotten to RCL 7 and GCL 3, and I think it’s about time to expand. I’ve been putting it off until the Grey Company can handle that on its own. Now that we’re at RCL7 and have a reasonable understanding of the needs of our base, we can start base planning effectively.

On shard3, my primary goals are, in order:

Because shard3 is CPU-restricted, efficiency is especially important. I’m spending a lot of CPU on move intents right now, so limiting movement is valuable. This means cutting out remote mining, which in turn means we won’t have as much energy to work with. Defensibility is less important than on some shards, because hostilities require CPU, but we cannot forget it completely.

We’ll aim to break up the room into modules. We’ll construct Franchises at each source, and a Headquarters at the Controller: 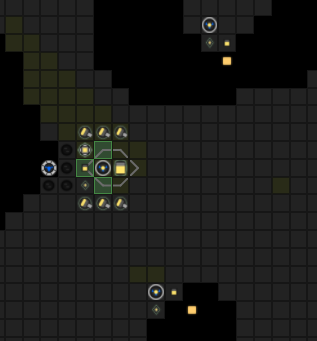 The Franchises have a Spawn, a Link, and a Container. The Headquarters also has a Spawn and a Link, a Container for the dedicated upgrader minion, the Terminal and Storage, and all six towers. (Since we don’t have lab or factory code yet, we’ll put off adding those to our room plan.)

We’ll assign these positions according to the following rules:

The Salesman minions at the Franchises will, after RCL3, harvest and then deposit energy in the Extensions, the Spawn, and the Link, in that order. Prior to RCL3, we’ll rely on our existing pattern of dedicated Carrier minions to move dropped/container Energy into those structures.

The ramparts on the diagram will be the locations of the dedicated Upgrader minion (on the left) and dedicated Carrier minions (top and bottom) who shuffle energy around within the Headquarters.

The Architects will generate the plan for each block (Franchise #1 & #2, Headquarters) once, and then convert it to a minimal representation which can be cached in Memory. Then, every n ticks, it will check the current status. If a structure should be built at the current RCL, but isn’t (and has no pending request), it will submit a BuildRequest; if the structure exists but needs repairs, it will submit a RepairRequest.

To test this process, I’ll use this RoomVisual extension from the Screepers organization (which has a lot of other helpful resources as well).

Previously, Architects were an Office function; however, if we want to use them to plan expansion (avoiding rooms that cannot accommodate our layout), we’ll need to run them on non-Office rooms as well. We’ll make these a special case of a Boardroom Analyst instead so we can analyze any room. 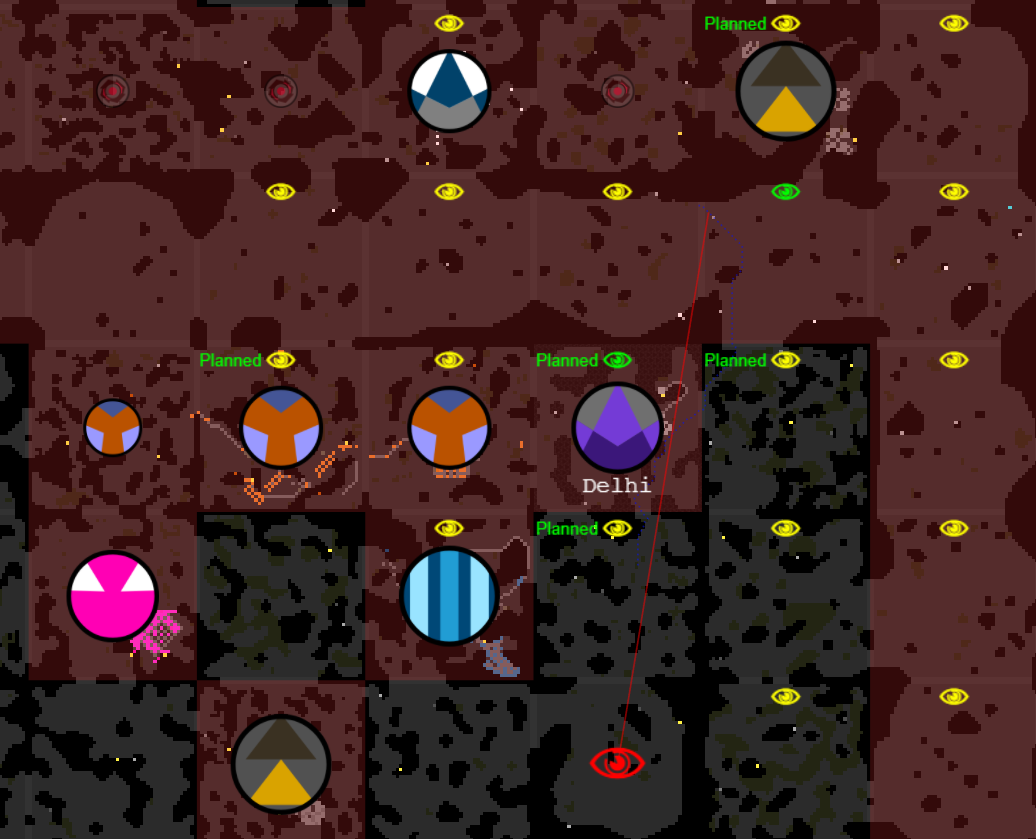 Finally, scouting: before we can plan a room, we need to know what it looks like. Because we have a centralized WorldState, all we need to do is send a minion to Explore each of the surrounding rooms, and then we’ll have everything we need to generate a RoomPlan.

Aside from the systems we haven’t begun to implement - labs, factories, extractors, power, etc. - the only thing we’re currently missing is ramparts. I think we’ll go ahead and put those off, too. I’d like to get some more rooms up and running first: we can extend our RoomArchitect later.

So, next up, let’s fire up the private server again and start building from scratch using the RoomArchitect. Then we’ll start planning expansion caravans!