by Jon Winsley on September 21, 2020 under screeps
8 minute read 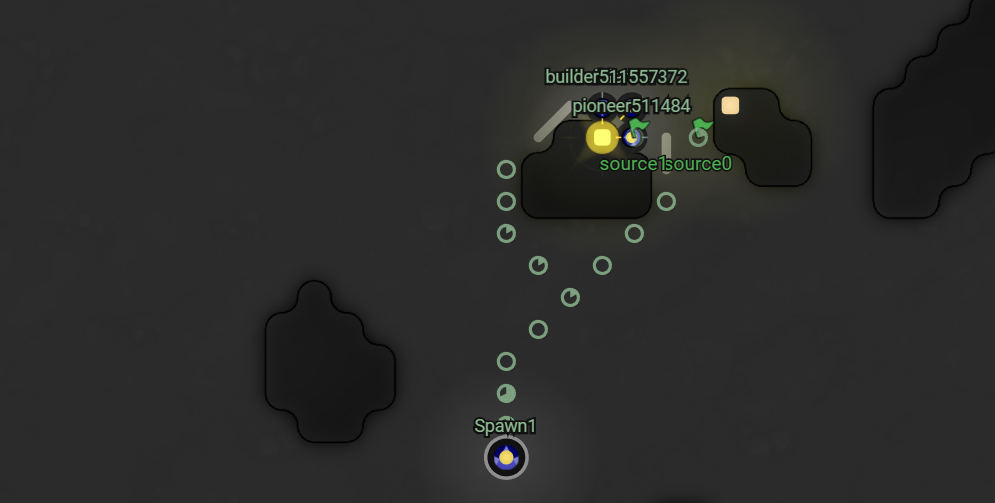 How do you make sure your minions are doing the work that most needs done?

First we need to track the work that needs done. We’ll call those Requests. The Task Supervisor will collect these as they come in.

Then we need to collect the minions that are idle. Since the Task Supervisor handles all work being done, we’ll just look for all of our minions and cross off any that are currently busy with something else.

Now we need to figure out which minion is best suited to fulfill which request. Buckle up; this is going to be a long post!

We’ll worry about optimization later; for now, let’s consider each possible path, and figure out the best way for a given minion to fulfill a given request.

Well, okay, one optimization: can a minion fulfill a request? A hauler minion, for example, can’t fulfill a Build request because it doesn’t have any WORK parts! On the other hand, an empty hauler can’t currently fulfill a Transfer request, but it might if it stopped to fill up on energy first.

So let’s start breaking this up conceptually:

Now, we can start to put our logic together. Each kind of task will be an extension of TaskAction, and will have its own prerequisites:

This is the beginning of a task tree! If the minion doesn’t currently have energy, then the prerequisite returns a task that it could do to get energy. That task might have its own prerequisites - must be able to carry energy, must be adjacent to the container - which might in turn have their own tasks. Once we get to a task which has no prerequisites, or the minion meets all of its prerequisites, we have a complete list of TaskActions that will result in fulfilling the request.

Now we can generate all the possible paths to fulfill the request. How do we decide which path is best? We’ll have to extend our TaskActions:

The cost method lets us predict approximately how much the action will cost (in ticks). In this case, we’re approximating with range, because doing the actual pathfinding gets expensive fast. We can tune this cost later: it should also factor in the creep’s effective move speed, for example. But for now this will do.

So, now that we have a path, we just have to call the cost for each Action in the path and add them up to find the total. Well… almost.

Whew! We now have a TaskPath and we know long it will take the minion to perform it. While we’re at it, we can also get the SpeculativeMinion’s predicted output: a hauler with 100 capacity will be able to transfer twice as much as one with 50 capacity.

This makes picking the best TaskPath for the minion easy. But we’re not done yet.

Stable Marriages of Minions and Requests

Let’s say we have two TransferAction requests from containers A and B. We have two idle minions, and the best paths have been calculated for both:

As things stand now, we’ll loop through our list of requests. TransferAction A will pick minion 1, because that’s its best option. But that means B is stuck with Minion 2, which is far more expensive! We need a better way to balance these requests.

Fortunately, the Gale-Shapley stable marriage algorithm exists to meet this need. I was tipped off to it by Ben Bartlett’s article on Screeps logistics, which goes into realms of mathematical wizardry that frighten even me. Nonetheless, I got the basic principle of it, and with some effort was able to make it work.

The idea is that given two lists - in our case, the TaskActions and the Minions - we should be able to create pairs, such that no un-paired TaskAction and Minion prefer each other to their current partners.

Going back to our example, TransferAction B prefers Minion1 over Minion2 (because it’s cheaper), and Minion1 prefers TransferAction B over A (for the same reason). So our naive approach failed.

Let’s say that Spawn needs 200 energy, and we have two idle haulers with a capacity of 100 each. Spawn generates an energy request: which hauler should fill it? Ideally, both! But our current system assigns one Minion per Request. To assign multiple minions, we need to track the Request’s capacity and the output of the assigned Tasks. If the Request’s capacity is not met, there is room for an additional minion; otherwise, we’ll skip it when assigning Requests.

This Task system still has limitations. It doesn’t consider multiple steps - collecting energy from multiple containers to fill a hauler, for example. And it’s not very efficient to calculate the whole tree of fulfillment possibilities: once it has a viable path of known length, it should be smart enough to stop checking longer paths.

Even when optimized, this generic route seems slow and CPU-intensive. Managers should try to limit requests, either by issuing tasks to minions directly if the task is well understood or by sending only the highest priority requests.