by Jon Winsley on July 30, 2020 under malware-analysis
8 minute read

Practical Malware Analysis is still a handbook for aspiring malware analysts, and while I’ve dabbled in the subject before, I’ve decided to work through the book for a better hands-on grasp of malware reverse engineering. Needless to say, this writeup will contain spoilers.

For this chapter, I had to track down an older version of IDA Freeware that would still run on Windows XP. Luckily the fine folks at ScummVM got permission from HexRays to host an older version, 5.0, which happens to coincide with the version used in the book. It’s IDA Freeware, not IDA Pro, but we’ll just have to make do.

In this writeup, I’ll follow the script of the questions a little more closely, to make sure I don’t miss anything significant.

What is the address of DllMain?

We begin with DllMain. After loading the dll into IDA, DllMain is right in front of my face, and after enabling line prefixes in the General Options I can see it starts at address 0x1000D02E.

Use the Imports window to browse to gethostbyname. Where is the import located?

The import appears in the .idata section, at address 0x100163CC.

How many functions call gethostbyname?

IDA provides a graph of cross-references that call gethostbyname. There are five separate subroutines identified.

Focusing on the call to gethostbyname located at 0x10001757, can you figure out which DNS request will be made?

How many local variables has IDA Pro recognized for the subroutine at 0x10001656?

This is the same subroutine we were just in. Moving the graph back to the top, I count twenty variables, recognizable by a negative offset. Some are prefixed, like var_675, and some have names apparently inferred, like hModule.

How many parameters has IDA Pro recognized for the subroutine at 0x10001656?

There is one parameter, with a positive offset, here labeled arg_0.

Use the Strings window to locate the string \cmd.exe /c in the disassembly. Where is it located?

What is happening in the area of code that references \cmd.exe /c?

This section of memory is referenced at location 0x100101D0. It’s pushed to the stack as a parameter for strcat along with the local variable CommandLine. Based on some references to reading from a pipe, it looks like a command is being received from somewhere (probably a network connection) and then being prefixed with \cmd.exe /c to run the command. This is a remote shell.

There are three references to dword_1008E5C4, but only one is a mov instruction. This is at 0x10001678. It’s being set with the results of sub_10003695. This subroutine runs GetVersionExA and checks if dwPlatformId is 2, which based on the documentation corresponds to VER_PLATFORM_WIN32_NT (Windows XP, 2000, etc.)

In short, it’s checking if this is a 32-bit NT-based Windows. If not, it uses “command.exe” instead of “cmd.exe”.

A few hundred lines into the subroutine at 0x1000FF58, a series of comparisons use memcmp to compare strings. What happens if the string comparison to robotwork is successful (when memcmp returns 0)?

This particular invocation happens at 0x10010452. If memcmp returns 0, it passes s (the sub’s parameter, a socket) to sub_100052A2. This fetches the WorkTime from the registry, formats it into a string, and most likely sends it to the socket.

What does the export PSLIST do?

The first subroutine, sub_10006518, collects information about all system processes, lists the processes’ modules, and then writes them to a file. I am not sure where the filename is coming from, however, because the reference [ebp-11Ch] doesn’t line up with a recognized variable. I suspect it’s pointing to a section of the process’s data to generate the filename. Perhaps further analysis will shed more light on this.

The second subroutine, sub_1000664C, also collects information about all system processes, but in this case it writes the output to the socket instead. 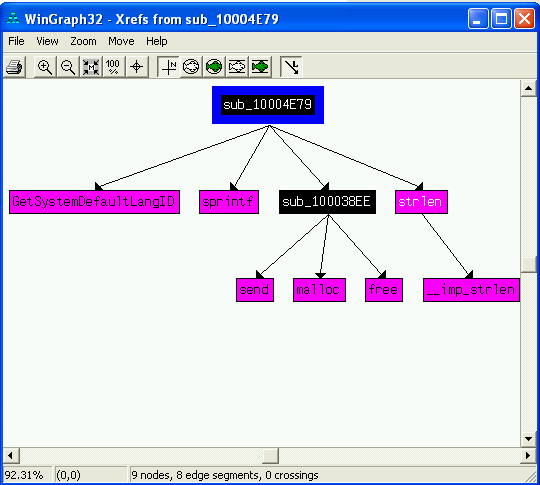 The API functions shown in the graph are GetSystemDefaultLangID, sprintf, send, malloc, free, strlen, and __imp_strlen. Based on this information alone, I’d rename this function GetSystemLanguage.

How many Windows API functions does DllMain call directly? How many at a depth of 2?

I created a user-defined cross-reference chart, excluding library functions, and found four direct external calls. At a depth of 2, I found 33.

At 0x10001358, there is a call to Sleep (an API function that takes one parameter containing the number of milliseconds to sleep). Looking backward through the code, how long will the program sleep if this code executes?

Looking backwards through the code, we see that the value of eax is multiplied by 0x03E8 (1,000 in decimal). Its previous value was therefore in seconds. This is returned from atoi, which converts a string to an integer. That call’s parameter is a pointer to the value stored at the address in off_10019020 plus 13 characters (whew). Following this down the rabbit hole, we find that IDA has incorrectly identified these bytes as code rather than data! After converting it to data and undefining it, we’re able to see the actual value: 30.

The program will therefore sleep for 30 seconds.

IDA identifies them as (translating to pseudocode):

Using the MSDN page for socket and the named symbolic constants functionality in IDA Pro, can you make the parameters more meaningful? What are the parameters after you apply changes?

After referencing the MSDN page (and double-checking my parameter order), I assigned symbolic constants:

The in instruction can be found at 0x100061DB. The eax register is populated by a hardcoded hex value, 0x564d5868, which in ASCII translates to VMXh. Following the cross-references, we find that the output of this function is tested and, if not zero, loads an error message “Found Virtual Machine,Install Cancel.”

This implies that, indeed, the malware aborts its install in a VMware instance.

If you have the IDA Python plug-in installed…

I don’t; so let’s see if there’s another way to do this.

The Python file contains the following:

Clearly, it is XORing each byte in this sequence with 0x55, and replacing it. Let’s try translating this into IDC (borrowing heavily from this example):

After importing and compiling this script, I can run it using Shift+F2:

Then I can convert the bytes into a string in the display. The results:

After comparing with the answer key, the main gap in my analysis was an incomplete understanding of PSLIST. The answer key notes that the export can be used to get information about a particular process name, not just all process names; I missed this in my review. But, with practice, I should improve at translating the logic on the fly.

I feedback.
Let me know what you think of this article on twitter @jonwinsley or leave a comment below!
comments powered by Disqus